“Stop it~! Let’s battle with me~! Am I the sacrificial lamb for your growth diary? I’m getting angry~!” 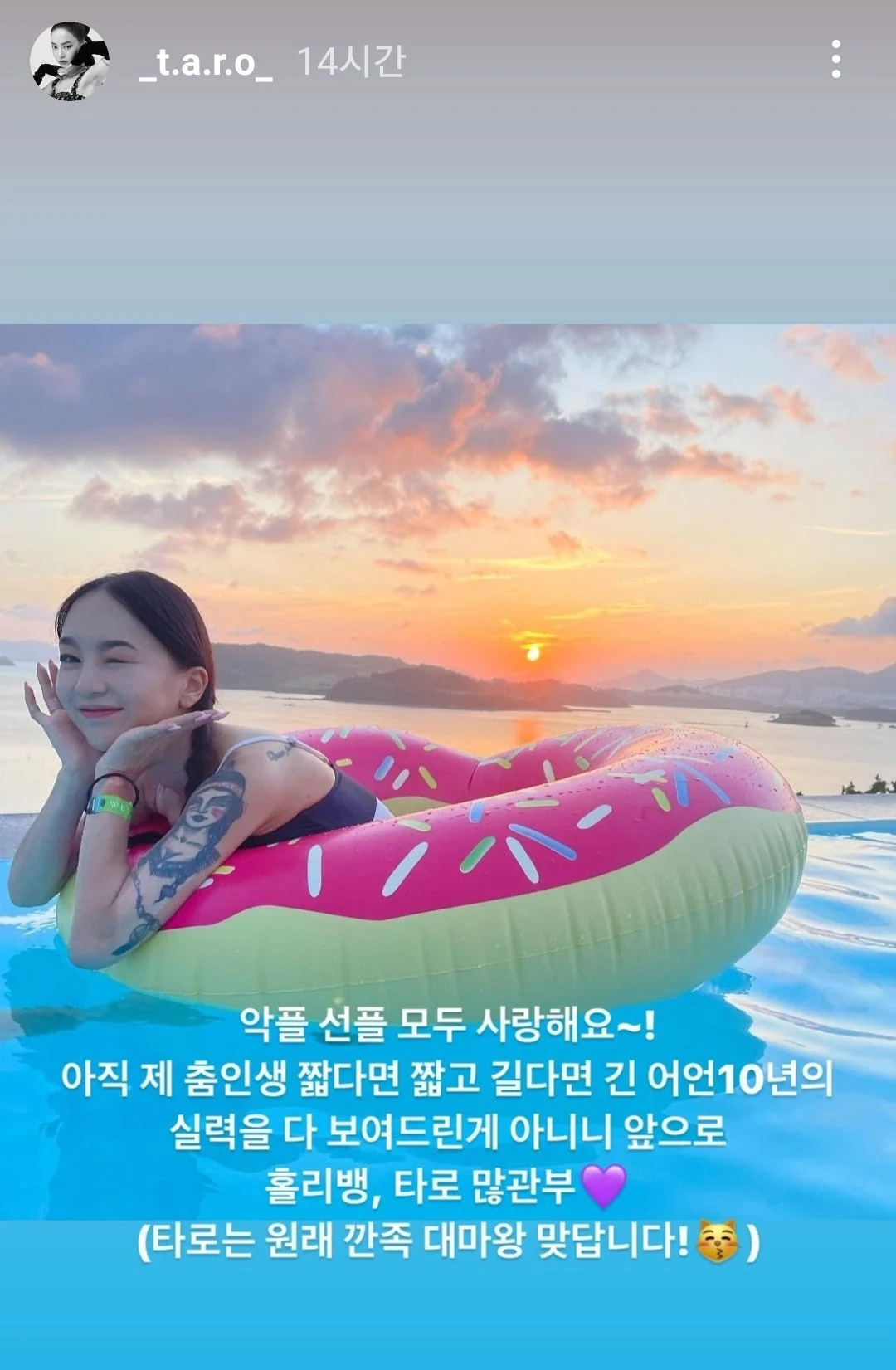 My dancing life was both short and long, but I will show you what 10 years of talent looks like, so please give Holy Bang, Taro a lot of interest <3

(Taro has always been the king of teasing!)

1. She’s quite an attention seeker herself

2. Hate comment aside, what’s up with the low-jab being the ‘sacrificial lamb for your growth diary’ thing…. Of course she’ll get hate comments for that

3. But I kinda f*cking understand her feelings when she calls herself the ‘sacrificial lamb for your growth diary’? This is a dancing audition program, imagine being a professional dancer and not being able to showcase everything you got because the idol next to you is so lacking, I’d be so pissed off too…. She’s being used for the narrative of the show, but she’s the one getting hate commentsㅋㅋㅋ  People should stop ganging up against her

4. But calling Chaeyeon the growth diary is f*cking accurate

5. If I were her, I would’ve been f*cking annoyed too. But I bet Chaeyeon really has nothing to gain either from this kind of editing… It’s just Mnet being disgusting again… This is the same as a survival program, they just use the same editing over and over again ㅋㅋ

6. But isn’t it accurate to call the editing of the show a growth diary? I just watched the episode and this is turning into Produce… The editing is freaking weird

7. I just wished that they didn’t put Lee Chaeyeon on the showㅋㅋㅋㅋㅋㅋㅋㅋ  Of course Mnet is the most problematic for their evil editing, but now Lee Chaeyeon is being sworn at because of the editing and her IG post ㅋㅋㅋㅋㅋㅋㅋㅋ

8. Because of the editing both Taro and Chaeyeon are getting sworn at. They didn’t do anything wrong though

9. Seriously Chaeyeon is only on the show to showcase her growth all the time

10. But Chaeyeon is the one getting the most hate here, she’s the real sacrificial lamb

11. What she’s saying is true though

12. There’s literally no benefit for Chaeyeon in going to this show

13. So if what that person is saying is true, doesn’t it mean that it’s rigged? The judges probably want to see a growth story so they’ll probably give the win to Lee Chaeyeon

15. Should’ve just put dancers only in the show…..

Gaby: If we end up picking Chaeyeon’s choreography, I’d seriously hate that. People like us earn a living through creating choreographies

Simeez: But if you take her point of view, if she can’t be the main dancer, wouldn’t her self-esteem really be destroyed? Being a backdancer from the start!

Gyurian: She’s an idol! She dances like the way I used to when I was a student! You can tell she still has ramp up to do

Hertz: That choreography…. I feel like pretty girl groups can do it, but doing it with the members here is lacking

Isak: For a choreography that’s meant for performing, it was just too weak…

1. I’ve loved Chaeyeon ever since KPOP Star, and I used to think she was such a good dancer, but somehow, now that she ended up with other people who are professionals, I feel like she’s nothing special after all. And I’m not saying this to look down on herㅜㅜ  I hope that she will have her time to shine in other performances in the future!

2. If you watch the broadcast you would knowㅋㅋㅋ All those people are making these comments in a friendly mannerㅠㅠ  Dancers will be more straightforward between themselves

3. Chaeyeon made this choreography as the center person and she was supposed to stand out the most, imagine if the dancers said ‘it was good, it was fine’, wouldn’t they be even more looking down on her? They’re just being honest with her and it’s true that she’s lacking… During battles, you need to stand out with your energy or take the opponent’s energy, but she has no experience doing so. You can see what her lacking parts are right away. I hate the fact that Mnet is editing it so weirdly focusing on her improvement now.

4. If you watched the episode, you would know. But they’re being very careful with their words towards Chaeyeon and they’re doing the best they can to be thoughtful. They’re even more ruthless against each other if they’re only between dancers

5. She does dance well, but she only has one style, and only does the same movements again and again. To be honest, I feel like what they told her were quite generous… There’s on need to baby her

6. As dancers, I’d rather other dancers be frank with me about how bad my choreography was. This will open way more opportunities for her

7. She just can’t dance… If she wants to enter a crew, she should at least get her basics right…

8. Wow, I feel like her choreography had on ‘point’ parts…

9. Looks like they tried their best being soft with their comments for her, her dancing is just idol level

10. I feel like all her movements are the same. The dancers really tried to be as kind as they could with her