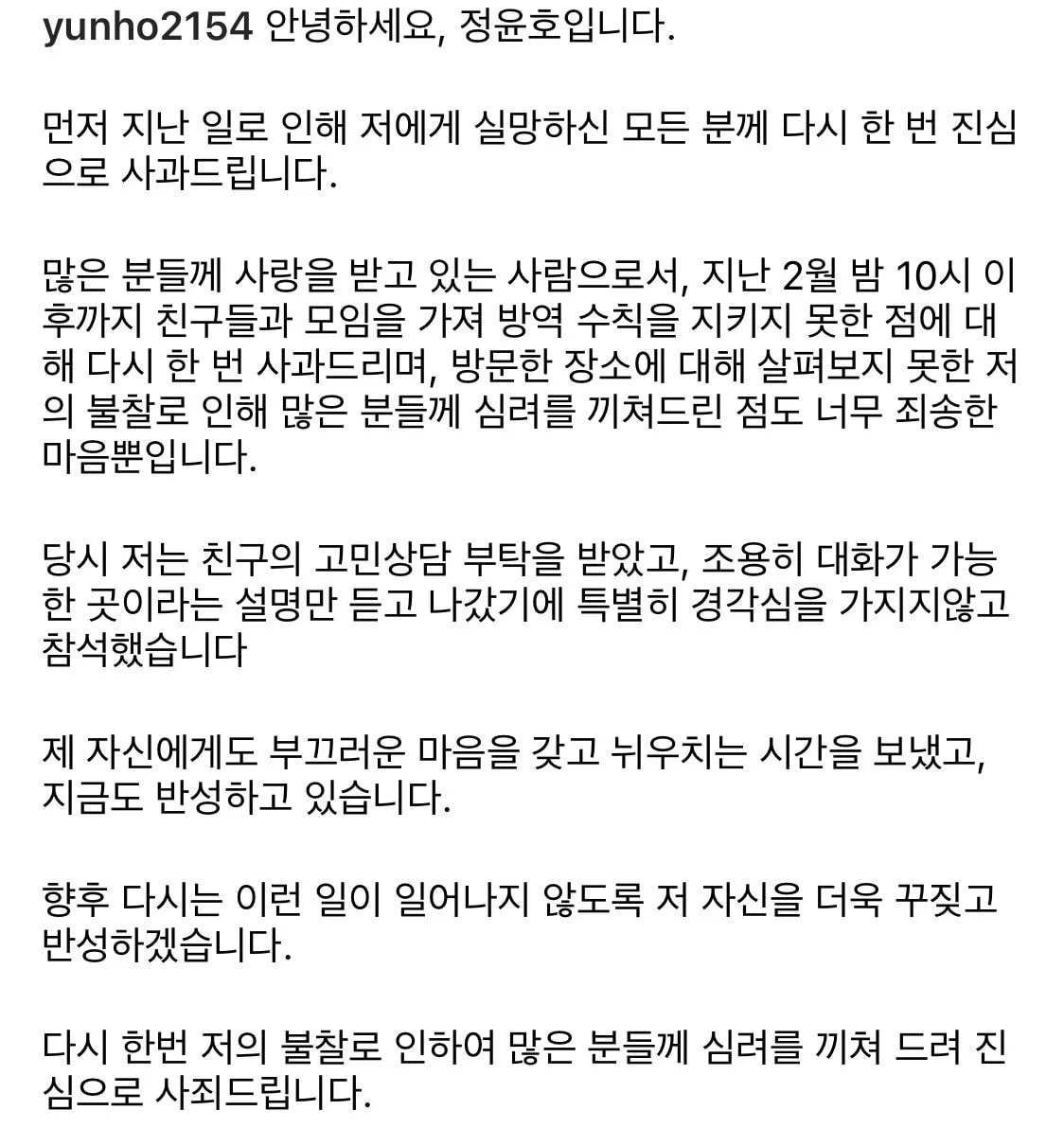 Hello, This is Jung Yunho.
First of all, I want to apologize once again towards the people who have been disappointed in me.
As someone who has been receiving love from many people, I apologize once again for not following the quarantine rules by meeting with my friends pass 10 p.m. in February, due to my negligence in not checking the places I visited. It was also due to my negligence for not looking at the location that I visited, I feel nothing but apologetic for the concern I have caused to many people.
At that time, I was asked by a friend to receive counselling for his concerns/worries, and I attended without being particularly vigilant because I only heard from his explanation that it was a quiet place where we can have a conversation.
I was ashamed of myself and spent a time of repentance, and I am still reflecting on it.
I will reflect on myself even more so that something like this does not happen again in the future.
Once again, I sincerely apologize for causing concern to many people due to my negligence.
original post: here
1. So he’s proud of having friends who visit the room salon as VIPs?
2. ㅋㅋㅋㅋ  I’m sure he was able to give good counselling with girls in his arms while drinking right? Bullsh*tter you make me want to barf, don’t even come back
3. Counselling for troubles?
4. Just how bad those concerns were?
5. ㅋㅋ  He’s saying the same bullsh*t again, to give counselling for his friend’s worries, so he unknowingly arrived at the room salon. And coincidentally, the room salon’s workers weren’t there when he visitedㅋㅋ  Does he think people are fools?
6. As a TVXQ fan, I’ve had nothing but huge disappointment…. Look at him blaming everything on his friend
7. You have so much money, is there a need for you to come out… ㅡ? I wonder if he still has fans
8. Sigh, don’t come back anymore~ We’re not buying this~ I’ve just thought about it, but didn’t he appear on Check This Out?
9. Retire and live as if you were dead (t/n: it’s a Korean expression, same as live quietly)
10. If his friend really wanted his counselling, he could’ve just called his friend to his house and talkㅋㅋㅋㅋㅋ He could’ve easily booked a location for his friend too, so why must he choose a bar? And a place where you can play with girls on top of that?
11. Looks like he’s coming back ~
12. TVXQ is coming back?ㅋㅋㅋㅋㅋㅋㅋㅋㅋ Room salon Yunho
13. I won’t believe anything that comes out of this person’s mouth in the future
14. Uheung Yunho (t/n: Yooheung = adult entertainment)
15. An adult entertainment bar that is quiet? Please share that place with me, me too I want to go there to counsel my friend for his trouble~~