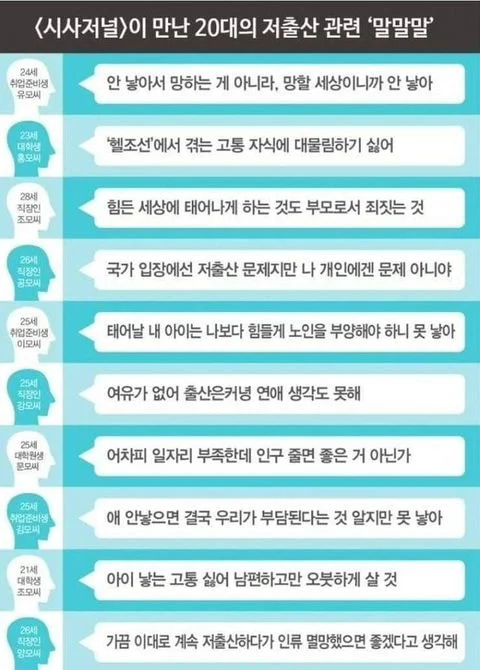 23 y.o university student: I don’t want to pass down the suffering that I experienced through ‘Hell Joseon’ to my kids

28 y.o office worker: It is a sin as a parent to give birth to kids in this harsh world

26 y.o office worker: Low birth rates are an issue for the nation but it’s not my personal issue

25 y.o office worker: I don’t have the freedom for that. Let alone giving birth, I’m not even considering dating

25 y.o university graduate student: There’s a lack of job so isn’t it a good thing to reduce the population?

25 y.o job applicant: I know that we will ultimately suffer from not having kids but I just don’t want them

21 y.o university student: I don’t want to live the pain of child birth. I want to live comfortably just with my husband

25 y.o office worker: Sometimes, I wish that birth rates would just continue to lower until the collapse of humankind

1. Even living alone is so hard

2. Please, I just hope that we’ll live up to my generation and collapse

3. I f*cking relate to the comment saying that they don’t have enought freedom so they can’t even think about dating, let alone dating

5. They are all saying the truth though…

6. I do understand them though

7. The collapse of humankindㅋㅋ for real, everyone just seems pessimistic and fed up. This is the reality now

8. The last one is f*cking funnyㅋㅋㅋㅋ

9. Nowadays, more people in their 30’s are having children. I’m curious about their opinions too

10. Everyone around me things the same