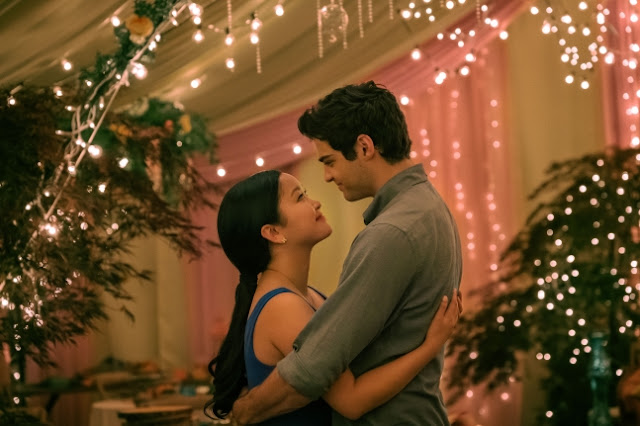 3. [+469, -15] I’ve noticed that none of the western media that features Korean kids don’t have Korean facial features at all. I think this movie could’ve done better with a more accurate portrayal. It’s like a Korean drama saying it’s going to feature a white American family so you expect someone blonde haired and blue eyed but the actors are Turkish or Arab.

4. [+296, -5] Anyone can tell by looking at Lara Jean that she’s not Korean. Asians can tell these things. She looks more Vietnamese or Thai. Her face is so round.

5. [+90, -0] There must be an abundance of Korean American actors, I don’t know why they chose a Vietnamese American one for a Korean role. There’s a difference in feel.

7. [+36, -10] I don’t know why they couldn’t pick a more elegant looking actress~~ they cast some chubby ajumma instead ㅜㅜ

8. [+16, -1] I knew there was something off about the movie… there’s a clear difference in facial features between Korean and Vietnamese features. Why couldn’t they have used a Korean American actor to play a Korean role? Or do all Asians look the same to foreigners anyway?

9. [+14, -0] They call the character Korean but she doesn’t look Korean at all, especially since they cast a South East Asian actor for the role ㅋㅋㅋ is this a joke? I’m not putting down South East Asians, I’m just talking about the difference in facial features between the two ethnicities. Ask any Korean on the street if they’ve ever seen a Korean who looks like her… but I guess foreigners think all Asians look the same anyway.

10. [+12, -0] Foreigners think all Asians look the same. I could tell right off the bat that she wasn’t Korean. She looks old for her age too. I wish they would’ve just cast a teen or early twenties Korean American actress.

13. [+10, -1] Americans think Asians have dark skin, slanted eyes, tacky fashion, dark lips… They always use actresses who fit these features. I don’t get it, and I don’t relate to it at all either. I really think that’s how Americans view Asians.

14. [+6, -2] I don’t get all this rage over a Vietnamese American playing a Korean role. There have been tons of instances where a Korean American actor has played other ethnicities. Just look at ‘Fast & Furious’ or ‘Heroes’, there are Korean actors playing Japanese roles, and no one cares. I’m sensing a lot of racist undertones in these comments like “how dare a South East Asian play the role of an East Asian?” And to those saying faces like Lara Jean don’t exist in Korea? No, there are even uglier faces. You think all Vietnamese women look like her? Well, you’ll faint if you ever see how beautiful the women are in Ho Chi Minh.

15. [+4, -1] My problem is that if content around Korea does well, then people are going to assume this is Korea’s image. If they use a South East Asian actress to play a Korean role, Americans will just assume that’s what Koreans look like, when there are clear facial differences. They have darker skin, too. Were there really no other Korean actors to cast instead?