The Billboard Digital Songs Sales chart for this week is adorned by many big K-Pop names. Congratulations to TWICE, MAMAMOO’s Moonbyul, Lay Zhang and VICTON on their entries to the chart! 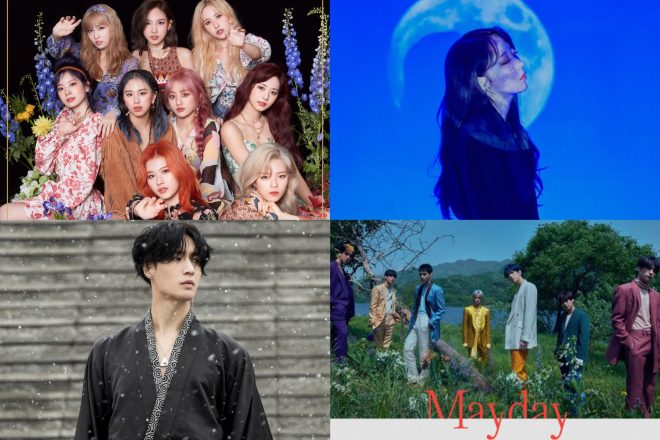 After making their grand entry in Billboard’s Top 200, TWICE scored big with their entry at No. 2 on both, Billboard’s World Digital Song Sales chart with their track “MORE & MORE,” as well as on the World Albums chart with their ninth mini album. “MORE & MORE” showcases the members’ sweet toned voices which are backed by tropical beats merged with peppy house sounds which is quite the charm factor for listeners.

Coming in at No.12, MAMAMOO’s Moonbyul evidently made her presence felt on the chart with her power packed emotional track “Absence.” The track is a part of the singer-rapper’s album, MOON: REPACKAGE. “Absence” gained a lot of attention and rightfully so, as it showcased a never seen before side to Moonbyul. The track is one where her melodic and soft vocals take the spotlight and mesmerise listeners.

Debuts on this week’s #WorldDigitalSongSales chart:

Further, lighting up the chart at No. 22 is EXO’s Lay Zhang with his track “Lit.” The track boasts of a distinctive sound. Traditional Chinese musical elements with modern and contemporary trap style music to create quite a powerful fusion resulting into a high octane listening experience. “Lit” definitely lives up to its name due to its dynamism that exudes through its overall style.

VICTON came in close as they fired it up at No. 23 with their latest release “Mayday.” The future-alternative, R&B track is a sound that the group hasn’t delved into before. However, having said that, VICTON does an impeccable job stylising the track to cater to their vocals and melodies. This makes “Mayday” a track you’d definitely be pressing the repeat button for.