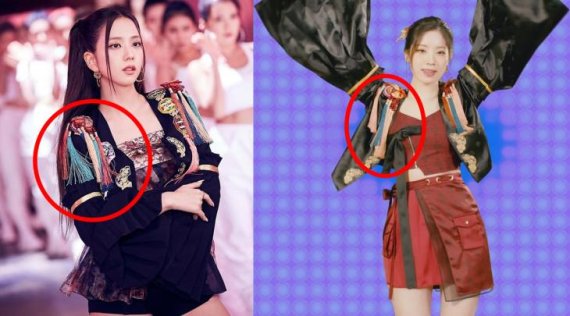 Article: Twice reps, “We were not aware of the similarities to Black Pink’s outfits, we are sorry”

4. [+177, -47] Only fangirls/fanboys and the unemployed with no lives would even notice this.. ㅋㅋㅋㅋㅋ

5. [+128, -20] No wonder.. I did think of Black Pink the moment I watched the music video. I just assumed the same designer was their coordi.

6. [+111, -5] Why are the comments being so lax about this?? This is an original design of the designer, you’re not allowed to just copy it because that makes it plagiarism and a wrong. Of course an apology is needed in this situation. Yes, we all realize that it’s the coordi’s mistake and not Twice’s. This is not a Twice/Black Pink issue but their coordi’s issue.

7. [+52, -4] Black Pink’s outfit earned a lot of fame.. it’s hilarious to me that someone working in the industry is claiming not to have known about it

8. [+47, -7] These comments… I don’t know if they’re written by Twice fans or not but if you guys keep pushing the “who cares, has nothing to do with us”, then people outside of your fandom are going to start cringing. This is a matter of an original design that was plagiarized. It’s wrong to say stuff like “who cares”, “who would even notice this”… The designer cares, the designer and everyone who worked on it would notice it. It’s absolutely wrong for designs to be ripped off in the video of a group from such a large company like Twice.

9. [+36, -5] From my knowledge, Jisoo’s outfit was the first ever to have the norigae hung from the outside, which was copied here, along with the overall hanbok colors and patterns. It’s obviously stolen… And even if the design was original, they should’ve been aware that Jisoo had already worn something similar and steered away from it. Did no one at JYP really watch Black Pink’s music video at all and truly had no idea?

1. [+1,211] It really does look similar… at least change the colors, or the accessories… The hanbok concept itself is pretty.

3. [+846] If the stylist called them out… then it’s a pretty hopeless situation. How did the coordi not catch this…?

4. [+358] You all should be hating on the coordi, not Dahyun. Dahyun just wears whatever is given to her, why hate on her? ㅎ

8. [+61] It was so similar the moment I saw it that I thought it was an homage or something but they didn’t even get consent for it..?