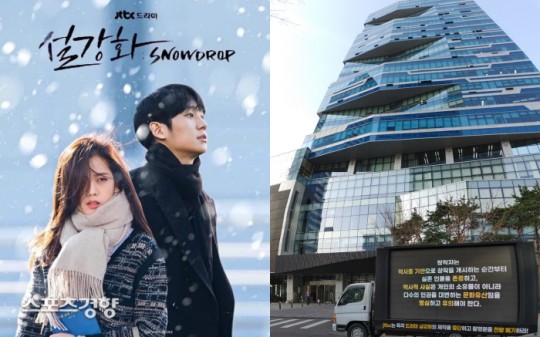 Article: National petition to halt filming for ‘Snowdrop’ reaches 160,000 signatures despite JTBC clarifying “there is no distortion of history”

1. [+265] Why is JTBC saying all this when the public has already said that they don’t want to watch it? Fine, go ahead and air it if you want to so bad.

2. [+207] No more dramas of this type of plot and all the affairs too. We already live in a world full of suspicion and now our TVs are filled with nothing but makjangs too. I know people will say “just stay quiet and don’t watch if you don’t want to” but it’s because of reactions like this that drama producers think they can get away with these things…

3. [+108] It feels wrong to hate on the drama before it has even begun… It doesn’t hurt to watch the drama first and then criticize them if there are parts of it that have distorted history. I think people are going too far after watching only one specific scene..

5. [+81] YG had invested in ‘Joseon Exorcist’ and now they have Black Pink’s Jisoo in a drama that praises Xi Jinping ㅋㅋ YG is a company that must go bankrupt no matter what

6. [+163] Why has Korea gotten so sensitive? No one cared back then. I guess now even historical dramas are off the table.

7. [+54] People are not blindly hating on this drama. It’s a drama about a very painful part of our history, where so many college students were tortured and killed needlessly for democratization. To turn that into a black comedy drama with a scene that so clearly glamorizes something so inaccurately, of course we’re going to be against it as a drama. To make things worse, the female lead’s name is taken after an actual person (which they deny, but Young Cho is not a common name).

8. [+20] All you idol lovers can watch this. People were so mad over ‘Joseon Exorcist’ but look at the hypocrites going “stop being so sensitive” for this drama ㅋㅋ

9. [+5] Seems like the public should be the ones writing and producing dramas at this rate