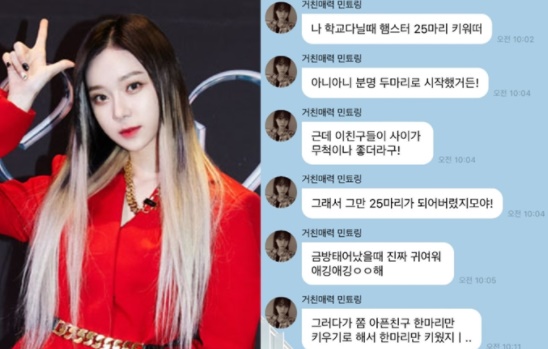 1. [+67, -8] Kim Heechul said one thing and ended up all over the news but why is news about a kid who’s already on her third animal abuse scandal not allowed to go up? ㅋㅋㅋ

2. [+65, -25] From the way she was texting, it sounds like she didn’t know what was going on. Not sure if this is something necessary for her to be in the news and criticized over..

3. [+23, -7] Well… animal rights really only became a thing in recent times. Back then, I think most kids grew up with a small pet like that and either didn’t know what happened to it, let it go in the wild, gave it to a friend.. it happened often. I don’t think kids who never grew up in that era are allowed to call this controversial.

5. [+6, -3] Some fans you are, more like hyenas waiting for someone to make a mistake so you can rip on them. Are you all morally perfect???? You never made one mistake when you were younger???

6. [+5, -2] I think this is one of those cases where you can make something problematic if you want to. Not sure why everyone’s so insistent on creating a fuss out of so much.

7. [+5, -3] Hmm.. I’ve gone from two hamsters to 30 but I’ve never abused any of them ㅡㅡ I cleaned their cages, gave them food.. they never ate each other either. I started giving one or two away until I was left with one and kept it till old age. I don’t know how people are so sure that she abused them just based on the texts alone?..

8. I think the problem people have is that if you keep 25 hamsters in one cage, they might eat each other… and she just left them like that?

9. She barely turned 20. If we’re going to blame anyone for something that happened when she was younger, wouldn’t the fault lie with her parents?? I don’t really see how she did anything wrong here.