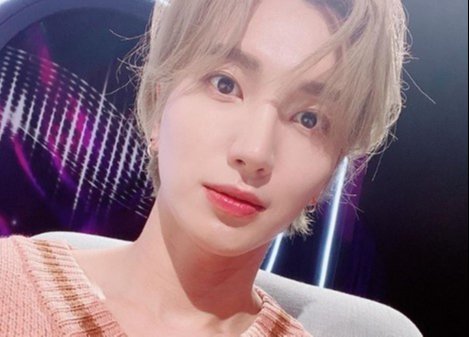 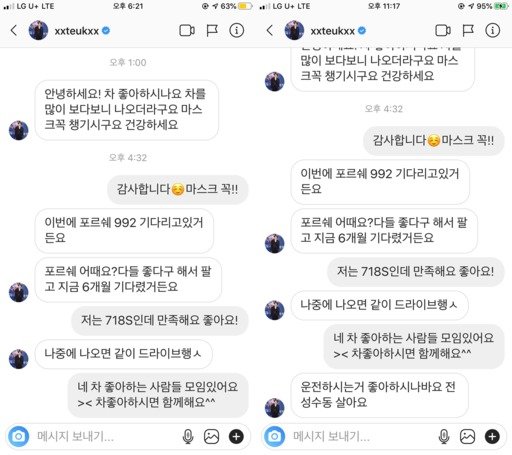 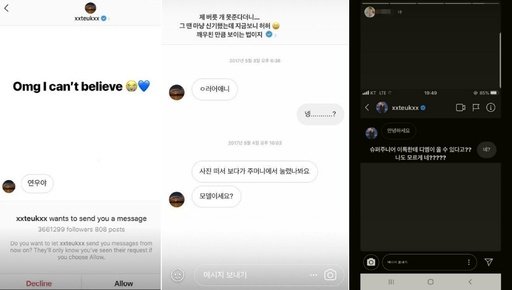 Article: Leeteuk sent a message?… “I got a DM too” proof shots one by one

4. [+555, -12] This guy has been doing this for a while. I remember T-ara Hyomin revealed on ‘Strong Heart’ that he sent her a Cyworld message when she was an ulzzang before debut. He also sent Kim Yuna a message and tried to friend her on Cyworld which she declined. Then he went and revealed that so SuJu fans hated on her; Then he came back with “Yeonwoo-ya”… He’s always been like this.

10. [+333, -17] Embarrassing ㅠㅠㅠㅠㅠㅠ sure, it’s different from the other perverted men, but this is just too pathetic ㅠㅠ

12. [+315, -51] This is actually proof that he’s living a clean life and making clean efforts. Imagine if he was like those Jang Dong Gun guys playing dirty in Katalk. It’s actually very clean of Leeteuk to be courting these girls like this.

14. [+237, -58] I actually like that he’s not acting arrogant just for being a celebrity and approaching people without a wall. It’s actually more pathetic of the person who shared all these.

15. [+234, -65] I don’t even know what’s wrong with this ㅋㅋ why bother publicly shaming him? Obviously a man has to brave up if he wants to approach girls and eventually get married, no? ㅋㅋ

16. [+216, -28] Even the rest of us non-celebrities have to cold approach women on the streets to get their numbers and all… this is a thousand times better than the likes of Jung Jun Young who drug women and force themselves on her.

17. [+204, -16] He seems like the lonely type but doesn’t know how to be with people naturally… From what he says on TV, he’s also a bit conservative. And he’s not talented enough to be needed outside of SM so… Leeteuk-ah, just know that people will be drawn to you as long as you’re a good person or famous ㅋㅋㅋ