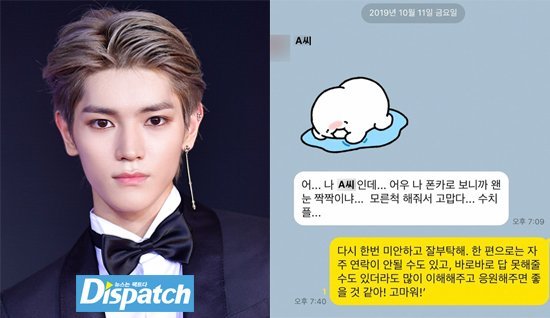 1. [+815, -105] So the whole thing was resolved between Taeyong and the victim but the third person who reported all this was just trying to stir up drama? Taeyong-ah, sue them.

2. [+719, -97] Did I just read this right?? Who is this third person to be stirring stuff up like this? The victim looks like they have a good relationship with Taeyong now. This third person should be sued.

– To put it accurately, it wasn’t necessarily a scam. He sold an item to someone who agreed with the conditions but when they received it, it wasn’t in a condition they were satisfied with and the two got into a fight with swears while trying to get a refund.

5. [+69, -18] I’m glad the truth has finally been uncovered. For someone claiming to have no ill intentions with Taeyong, why did they maliciously edit the Katalk like this? Seems like they were trying to light a feud between Taeyong and the victim.

6. [+59, -5] The person clearly knew that anyone would believe them if they wrote up a bunch of lies on a community board so they wanted to abuse their power against an idol like this

7. [+58, -17] It’s sad that his name has to be dragged through the mud up and down like this just for being a public figure, regardless of whether something’s true or not…

10. [+49, -4] So he was getting all this hate for no reason this whole time? To the point that even Dispatch had to step up? This should’ve been SM’s job but maybe they felt the need to stay quiet in case people accused them of defending him. I hope SM is taking care of his mental health because this would surely turn anyone’s mental into dust.