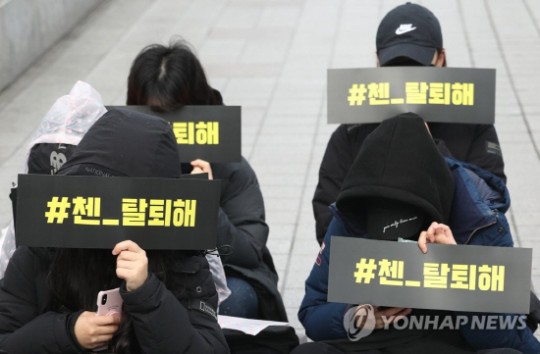 Article: EXO Chen, fandom divided into two over news of his wedding “I don’t care to pay for his baby formula” vs “He should be congratulated”

1. [+1,120, -115] Jongdae-ya, quit being an idol and just be Kim Jongdaeddy… Come on, you know that we don’t want to see you unable to control your facial expressions off camera again, getting into mental fights with your fans… none of us want that. Your stubbornness is putting the other members in an uncomfortable situation. Please get a clue and leave on your own.

4. [+454, -29] He never considered the other members at all but now he’s using their pain as a shield to protect himself, how ridiculous; Fans would not be against him to this point if he had acted right from the start. He’s the one who was unable to control his facial expression at fan meets, he’s the one who gave fan gifts to his girlfriend, and he’s the one who went radio silent to hang out with his girlfriend for a month before coming back now and saying he wants to stay in the group.

6. [+144, -13] The important point here isn’t Chen’s wedding. The general public seems to think that fans are acting like this because he’s getting married and we feel like we’re being thrown out, and while I’m sure that those fans do exist, the majority of the fans now would’ve been people who would’ve been understanding if he had said from the start that he had a girlfriend and slowly introduced her through a process. Instead, he randomly came out saying she’s pregnant and that they’re getting married, all while he’s still an active idol. Obviously the other members aren’t going to say they’re against him to his face but I’m sure they all know how his decisions will implicate the team. Kim Jongdae has not shown an ounce of consideration towards his team or his fans. His private life is obviously more important to him so he should just leave the group, take off the Chen name, and go do whatever he wants to do.

7. [+116, -5] Fans would not be this angry if Chen had been like Taeyang where he introduced his girlfriend and spent years on the relationship before coming out with wedding news. Chen fans only found out with their baby due soon, while he’s still unmarried… so imagine the shock. This isn’t a simple situation where fans are like “you’re an idol so you’re not allowed to get married!”

8. [+87, -6] It’s a situation similar to Sungmin. He’s not a solo, he’s an idol in an idol group. Dating’s fine but pre-marital pregnancy is honestly going too far. Chen needs to live his life as a father and husband and quit his life as a member of a group.

9. [+74, -6] Don’t compare Chen to Taeyang. Taeyang went public confidently while Chen acted like he wasn’t in a relationship and let fans cover for him. It’s shameless the way he doesn’t even feel grateful or sorry to them.

10. [+53, -1] Well, Chen’s going to need to work and make a lot of money if he wants to buy his blessing some baby formula and keep up with his attention wh*re of a wife’s luxury spending habits. He can go solo, he has enough choding and international fans who will listen to his music ㅋ so please leave.