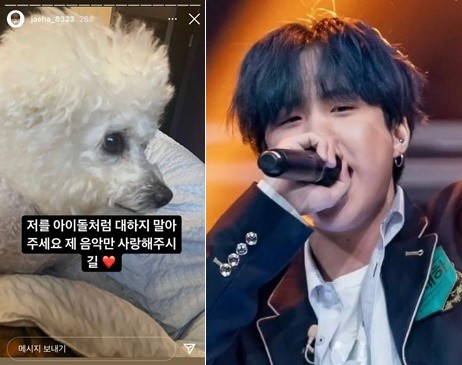 Article: Rapper Kim Jaeha rejects fan support asking them not to treat him like an idol and to only love him for his music

1. [+726] What is he saying… even non-celebrities who get a moment on TV get fan comments on their Instagrams. “Don’t treat me like an idol”? There are so many athletes and musicians who enjoy the love and support of their fans, how arrogant of him to say something like this ㅋ If he wanted to focus on his music, then he shouldn’t have gone on TV at all.

2. [+435] If he has to concern himself with how fans choose to support him, then I think he’s already losing grip of the “type of artist” that he hopes to be. Stop paying attention to these things and just stick to producing your music. You’ll be fine as long as your album is good… you can become the rapper that you want to be.. fighting 👏

3. [+387] What is so wrong about being treated like an idol, though? ㅋㅋㅋㅋㅋㅋㅋㅋㅋㅋㅋㅋㅋㅋㅋ

4. [+143] Sounds like someone’s getting too full of themselves ㅇㅅㅇ

5. [+150] He could’ve just said something like “thank you for your love and support but I want to be recognized as an artist for my music”… and why is he saying “don’t treat me like an idol” like being an idol is something beneath him?

6. [+256] The fact that he doesn’t want to be “treated like an idol” already means that he has a negative opinion of idols…

7. [+285] If he doesn’t want his fans to treat him a certain way, then his fans shouldn’t do it… however, all his fan did was write a comment congratulating him and he chose to pin the comment and make them feel awkward by saying “don’t do this” without even saying a thank you for the comment. That’s thoughtless of him. He’s the one who chose to audition for Big Hit to become an idol but I guess he chose to leave because he didn’t want such “treatment” ㅎ

8. [+61] Having a fandom will make things easier for him… but I hope he doesn’t change his mind about his fans in the future then

10. [+44] Does he not realize how much blood and effort goes into being an idol? What does he mean “don’t treat me like” one? ㅋㅋㅋㅋㅋㅋㅋㅋ

12. [+53] Ha.. now that’s real hip hop. Jaeha doesn’t need all that idol fandom stuff where they write supportive comments, bulk buy you fan gifts, put up birthday ads around the city, and stream your songs~ Jaeha is going to live off of his music and his music only~ I hope he doesn’t lose his roots and sticks to his music 🤙

13. [+9] I understand where he’s coming from but there was definitely a better way of saying all of this. He seems to have a way to go in terms of maturing.