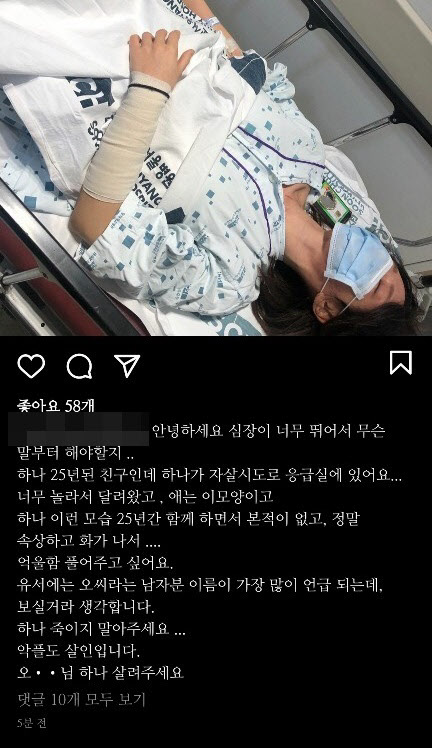 3. [+389, -8] I think if this person was a real friend, they wouldn’t be able to post at a time like this. A real friend would wait until her condition improved~ ㅠ

6. [+158, -0] So your friend attempted to commit suicide and the first thing you do is take drama pictures to post on Instagram?

7. [+131, -5] It feels wrong for the friend to take a picture of her friend laying there after an attempted suicide. If you look at the picture, there’s a phone next to Hwang Hana. So the friend took the picture with her own phone, sent it to Hwang Hana’s phone??? Then unlocked Hwang Hana’s phone with her fingerprint and then posted it from her account?? ㅋㅋㅋㅋㅋㅋㅋ I’m amazed at the effort.

8. [+126, -5] Pfft ㅋㅋㅋㅋ This is the Suncheonhyang hospital in Seoul ㅋㅋㅋ I was a resident there for 5 years ㅋㅋㅋ She’s not dying. There’s no C-line and only one IV drip, there’s no ER patient that gets such little treatment ㅋㅋㅋㅋㅋㅋㅋ So her arm’s bandaged up but who put her hairband back on her wrist? The nurse? The setting looks like any normal ER bed ㅋㅋㅋ At the hospital, you do not get placed on such a bed if you’re in need of real emergency care in case something like an arrest happens and the patient dies. You can’t just expose that to everyone else in the room waiting with their patients ㅋㅋㅋㅋ

9. [+81, -2] So your friend wrote a will and is dying but you decided to post a picture of it??????? You do realize that there were 6 deaths from patients who were waiting for a room but couldn’t find help due to the pandemic? Everyone, please wake up to the reality of what’s going on around you…

10. [+77, -0] She shows how important raising someone right is, not just money… Her soul was unfortunately ruined by her wealth.