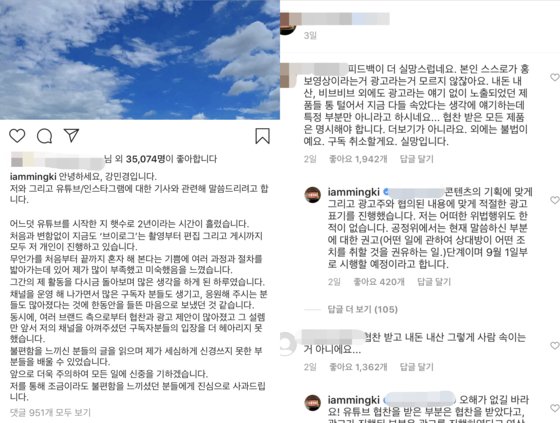 2. [+73, -4] I had a weird feeling when Kang Minkyung was on ‘Radio Star’ acting so innocent, like she didn’t even know how to monetize her YouTube videos.

3. [+66, -0] Han Hye Yeon already sold her 800,000 sub account to Kakao M for 7 billion won. She doesn’t own her account anymore, and canceling your subs won’t impact her at all. All of her ‘bought with my own money’ videos were basically ads that she was being paid 30 million won a piece for. Like Dispatch said, YouTube is easy money for these celebrities.

5. [+29, -0] So wrong to use their fans for money like this. You guys already make enough money, how do you not have any morals for yourselves?

8. [+10, -0] Kang Minkyung acted so innocent, so humble, so upright, this is just disappointing

9. [+5, -0] Claiming that the products you’re showing were bought with your own money is fraud when you’re actually being paid by advertisers to promote them. They need to work on better methods to promote ads on their channels.