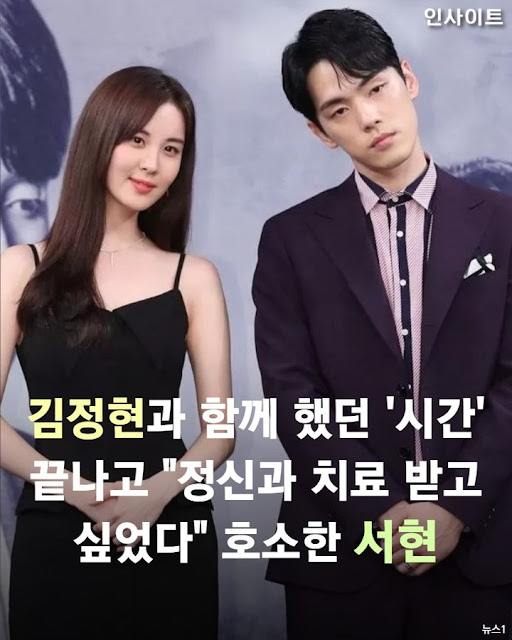 Article: Seohyun revealed “I wanted to get mental therapy” after working with Kim Jung Hyun on ‘Time’

1. [+1,437] The only articles coming up about Kim Jung Hyun lately are all negative. Seems like someone’s trying to put out only bad news about him right now.

4. [+638] It seems unfair to put out articles of this nature without knowing exactly what he was going through at the time ㅜㅜ yes, it was irresponsible of him to leave the drama like that but.. it doesn’t feel right for him to get hate for stuff that happened in the past.. 😢

6. [+315] I remember he got a lot of hate back then for his attitude. Even looking at the pictures now, just look at his facial expressions ㅋㅋㅋㅋㅋㅋㅋㅋㅋㅋ he should’ve been more mindful of Seohyun and the producers than his girlfriend

7. [+253] I can understand why his agency is pissed, though ㅋ They handled his SBS scandal before it got any worse and yet he was already shopping around for other agencies before his contract was even over. I’m sure it didn’t look good to them ㅋㅋ

8. [+167] Kim Jung Hyun got hate for this back when it happened. He acted irresponsibly and affected Seohyun and the drama producers in a negative way. That’s fact. He did something bad and he’s getting the attention for it now.

9. [+207] Kim Jung Hyun’s fans need to stop shielding him with all these “media play” claims ㅋㅋ SNSD fans know how much Seohyun suffered during all of this and she gave interviews talking about her struggles during these times. Why was it okay for him to ruin the works of other co-stars and staffs just because he was in a bad mood? He’s a public figure, he should know the responsibilities that come with such a role ㅠ

10. [+268] He’s just unprofessional ㅋㅋ what kind of actor could act so embarrassingly at a press conference? Just because Seohyun touched him, he grabbed a wet wipe and wiped himself off. Then he left in the middle of it all? His agency then covered all of that for him, paid for all the penalty fees for him leaving, and smoothed out his image with the media only for him to go and look for other agencies before his contract’s even up? What kind of nuisance is this? ㅋㅋ