The July issue of Dazed Korea features the lovely ladies of LOONA!

LOONA, who recently received the Rising Star Award from the 2020 Brand Customer Loyalty Awards, has continued to prove their growing popularity in both Korea and overseas. During the interview, the members answered questions regarding their hobbies, nicknames, role models, and more.

Referring to the cellphone commercial Heejin filmed a couple years ago, the interviewer asked if she was really a skateboarder in real life. Heejin answered, “In that commercial, I acted out the facial expressions of riding a skateboard, but I was helped out for the full shot by a different model.” Laughing, she added, “I do know how to ride a skateboard, but I can only go straight. There was a scene where I was on inline skates, and that one I filmed myself.” 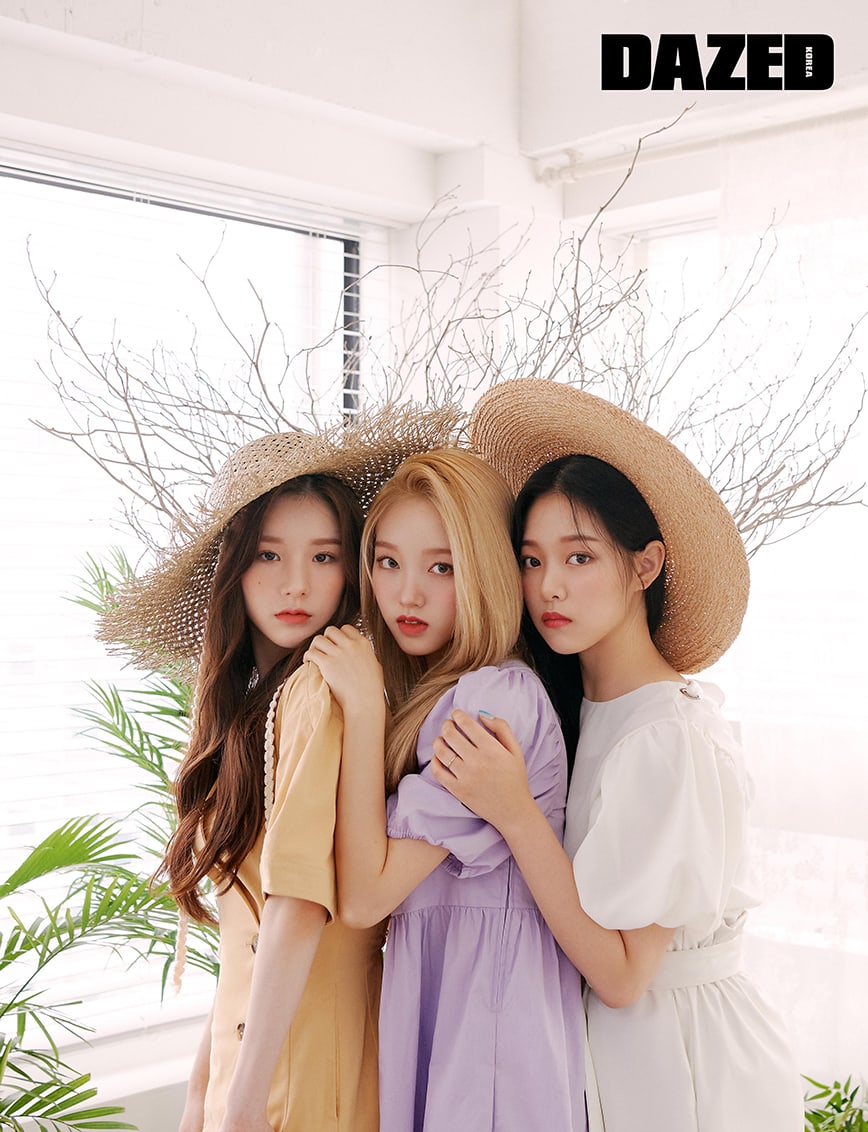 Olivia Hye talked about being a pool player before she was an idol, sharing, “I learned to play pool, but my skills were regretfully not that good. If I was really good, I might’ve even ended up pursuing it. I typically played pocket ball and even went to a couple competitions. Although I can’t play now as often as I used to, I sometimes visit pool halls to practice and think about the past so I don’t lose my touch. I never know if it could become a useful special skill of mine.”

Chuu, who has previously shown off her athleticism at the “Idol Star Athletics Championships,” spoke about what exercise she’s been doing recently. She said, “I don’t know if it’s because I was born athletic, but I’ve been good at sports since I was young. Since I grew confidence, I naturally became better too. When I was a student, I did a really wide variety of exercises, including badminton, volleyball, kickball, dodgeball, and jump rope. I also have two younger brothers, and I think playing with them naturally made me enjoy ball games.”

She continued, “These days, I’ve been paying a lot of attention to my body line, so I focus on cardio exercises. I’ve been doing exercises that make your collarbone and shoulder lines pretty.”

After picking Gong Hyo Jin as her role model, Hyunjin explained, “While watching Gong Hyo Jin act, I thought that she was really professional. I felt that there was a lot I needed to learn from her. She’s diligent with self-care and has so many different charms to her. I watched her film ‘The Most Ordinary Love,’ and I wondered how much time and effort she spent to be able to act so naturally.”

Although most students dislike having to wear a school uniform, the interviewer mentioned that Jinsoul had previously revealed that she liked them. They asked what her typical style was, and Jinsoul replied, “I felt attached to my uniform because it’s something you can only wear when you’re a student. My style is close to something that looks nice but effortless. Unlike our extravagant stage costumes, I typically go for something all black that doesn’t catch the eye but is simultaneously pretty chic. If I incorporate color, I usually add just one piece as a statement.” 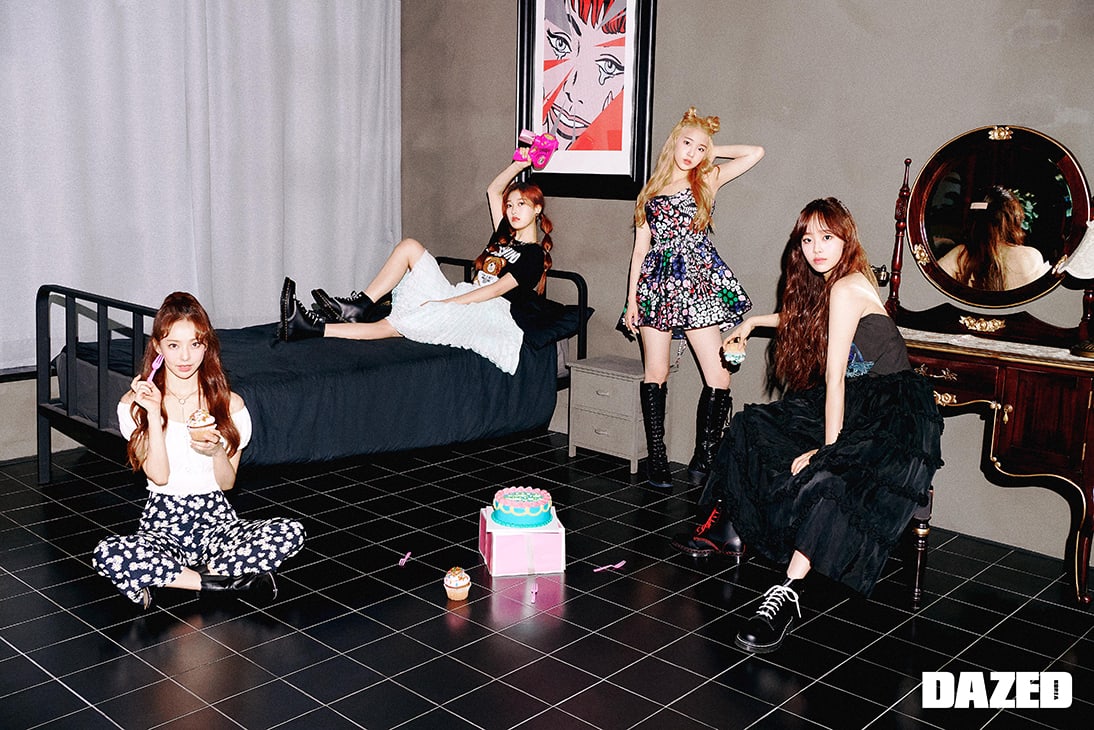 Choerry explained the origin of her unique stage name, sharing, “When I was a trainee and I introduced myself to our agency staff, I would say, ‘Hello, I am Choi Ye Rim!’ However, if I was kind of rushed, it sounded like, ‘Hello, I’m Choerry!’ That’s how it became Choerry. Now, I really like my name. I even gained the cute nickname ‘Cherry.’”

As an early sleeper and an early riser, Kim Lip is known as the “grandma” of the group. She explained this nickname and her recent sleep patterns, saying, “In the past, my eyes would just open at 4 a.m. Recently, that habit has gone away. I don’t know if this is good or bad, but I typically get tired around 10 p.m. If we’re working, there are obviously times when it gets late or we stay out until the morning, but even if I sleep that late, I always wake up around 7 or 8 a.m. no matter how little I sleep. I think that sleep pattern has engraved itself in my body.”

The interviewer mentioned Gowon’s popularity when she was a student due to her pretty looks, to which she responded with a laugh, “I’m embarrassed.” She continued, “My friends would just tell me ‘Hey, you’re kind of pretty,’ and I think that got blown out of proportion. I ended up switching schools, so I went to take photos with my friends as a keepsake. I think that somehow turned into the story that they had lined up to take photos with me.”

As both LOONA’s youngest member and her family’s only daughter, Yeojin commented, “I think that’s why I have a lot of aegyo. I have a bright personality and a lot of energy. I’m also the type to express that personality instead of hiding it. Sometimes I worry that my members feel burdened by my high energy, but they’re always so encouraging that I feel thankful and happy.” 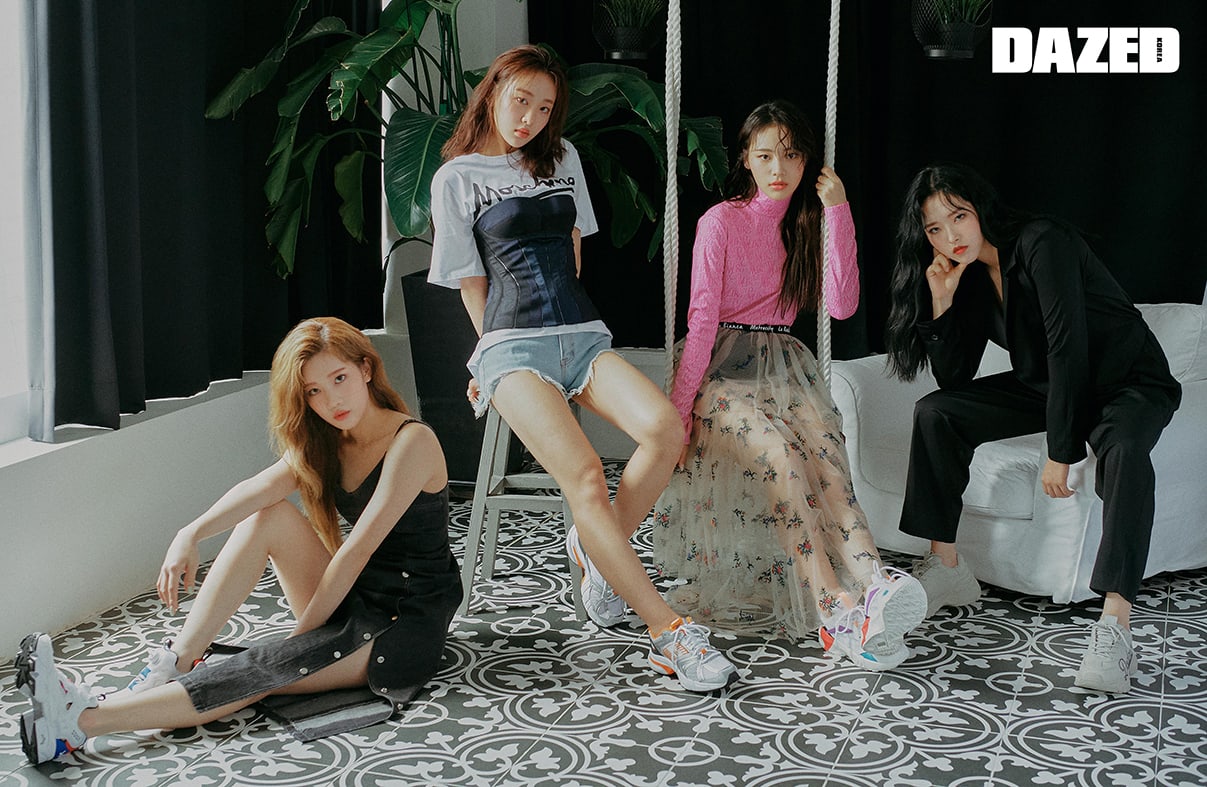 Yves talked about her excellent grades as a student and how she maintained them, saying, “At first, my parents were against me becoming an idol. That’s why I studied hard to get their approval to become a singer. Even if I was exhausted during class and was nodding off, I still managed to write down all the important points my teacher was making. After writing that all down, I kept looking at it in the car to my tutor and on the bus. I would even sit on the subway and solve problems. That’s really the only extreme thing I did. Also, whenever we thought something would come out on a test, my friends and I would create a study group and study together.”

While Vivi is the group’s oldest member, the interviewer explained that they had heard she was like the youngest. Vivi responded, “I think it’s in my personality to depend and rely on others. However, since I’m the oldest, there are times when I think, ‘Oh, I guess you can still think like that,’” adding a laugh.

As LOONA’s only foreign member, Vivi also shared, “It’s upsetting that I can’t frequently tell my mom in words or through my actions that I love her and that I’m thankful. I always want to help her and tell her that I love her.”