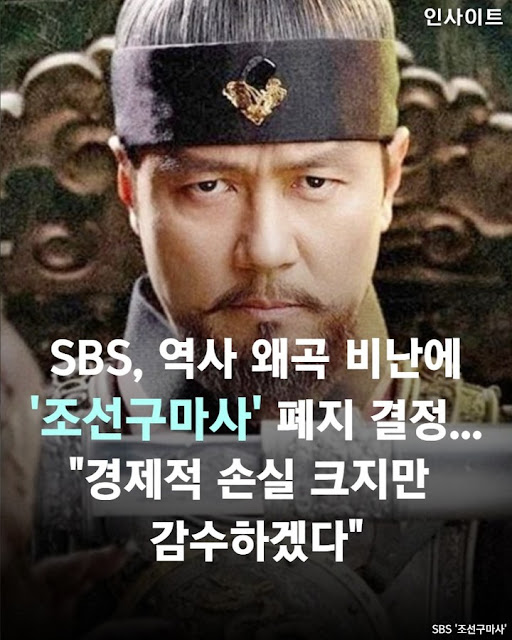 1. [+1,420] This isn’t over yet. It’s only being taken off air in Korea but we must make sure that it’s banned from being exported overseas as well as streamed on Netflix, etc.

2. [+740] Is this being completely taken off of international streaming sites too? Or just Korea?

3. [+749] The scriptwriter of this drama Park Kye Ok is a Yanbian Chinese who naturalized in Korea. Her agency is Chinese as well. She’s been cosplaying as a Korean to try and taint our country’s history as well as King Sejong’s name. I’m more mad that the PD and producers all let this happen.

4. [+283] The producers have no one to blame but themselves. I hope they are truly sorry to their cast members…

5. [+250] What can you expect from a scriptwriter who’s Yanbian Chinese? She may have been naturalized in Korea but her heart is facing towards Xi Jinping, so of course her work will be a distortion of history. If Korean companies continue to accept funding from Chinese investments, we’ll be swallowed by them whole in due time.

6. [+157] Our culture has suffered a bigger loss than the financial loss these producers are complaining about

7. [+76] Do not complain about financial losses when you shouldn’t have distorted our history in the first place!! Do not shift blame!!

10. [+112] I mean, what was the point of filming the mooncakes? There had to have been a reason, right? Was it sponsored by a Chinese company? Were they thinking at all?

4. [+399, -4] But apparently they’re not going to stop exports to overseas? Isn’t that more important than this?

6. [+114, -1] The problem is that China will continue to broadcast it on their platforms. Even if we stop it in Korea, it’s pointless if it gets exported overseas. What’s the point if we don’t air it here…? We’ve basically produced a drama that proclaims our country under Chinese rule and exported it ourselves..

8. [+86, -0] Taiwan already warned us of this before. They told us what would happen if Korean TV kept accepting Chinese investments, and that it’d be too late once we realized that we were being sunken by them. Broadcast companies need to start waking up, as well as the public