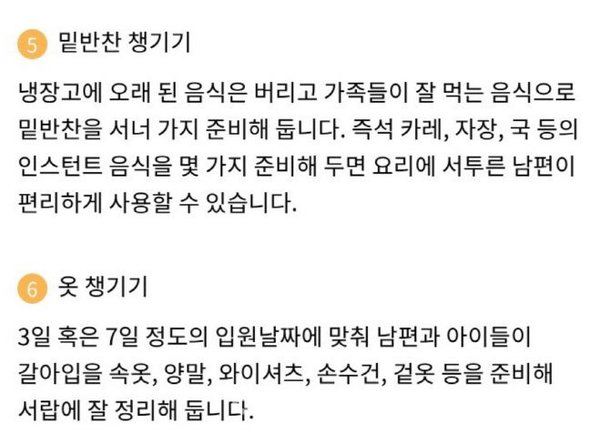 Seoul city put out a pregnancy and birth manual for women that has come under fire for its outdated gender roles. The manual lists out a number of affairs that expecting women should handle before getting ready for hospitalization and birth such as making sure there’s food in the fridge for the husband and getting his clothes and underwear cleaned and ready for the duration of the time she’ll be away.

3. [+198, -30] Men have no problem doing any of this in the army. Actually, one might even argue that they’re better than women at this stuff too. They just choose not to do it because they’re so damn lazy.

4. [+37, -6] What the f*ck, do people just think women are born with some Wonder Woman kit that gives them cooking, cleaning, laundry, and family care skills?

6. [+20, -1] There’s a crap ton of other stuff in there too ㅋㅋㅋ like how to have intercourse, how to pleasure your husband… I would’ve believed it if someone told me ilbe wrote this manual ㅋㅋㅋㅋ

7. [+20, -2] Now I’m actually wondering if the person who wrote this is an ilbe member. Even as a man, I can tell that this is just plain wrong. How could anyone think of writing such a thing?

8. [+14, -2] The notion of the woman being nothing but someone who takes care of their husband and raises kids is very strong in our country still. Even in families where both the parents are working. Reality is that women who are just barely recovering from birth are being yelled at to fix their husbands dinner by their MILs. To all of you unmarried women, just stay that way. If you love your man so much that you absolutely must get married, then live as a DINK… These notions aren’t going to go away any time soon.

1. [+839, -34] And this is why women don’t want to get married… Marriage is a one way train to hell for any normal woman;; If a pregnancy manual is this bad, can you imagine the treatment unmarried women get?

2. [+421, -8] It’s not like men are born without hands, why can’t he fix his own meals, why would you expect it from your pregnant wife ㅡㅡ and then they’ll go around complaining about the low birth rates in this country

3. [+212, -62] I’m always telling my daughter… Korean men are the worst so I’d rather they date a foreigner. At least foreign husbands are more dutiful to their families. Koreans need to completely take apart our marriage culture and start over from scratch!!

5. [+114, -0] Wow, I went to read the whole manual and someone really needs to be blamed and fired for this. This isn’t even the worst of it, there’s a ton of weird stuff about intercourse. Just simply taking the manual down isn’t enough. There needs to be an apology and notice of termination. I felt so embarrassed reading the manual, I can’t imagine how disgusted actual pregnant women must feel.