“Hello, this is ADOR.

We are preparing a new single for the first winter with the Bunnies. 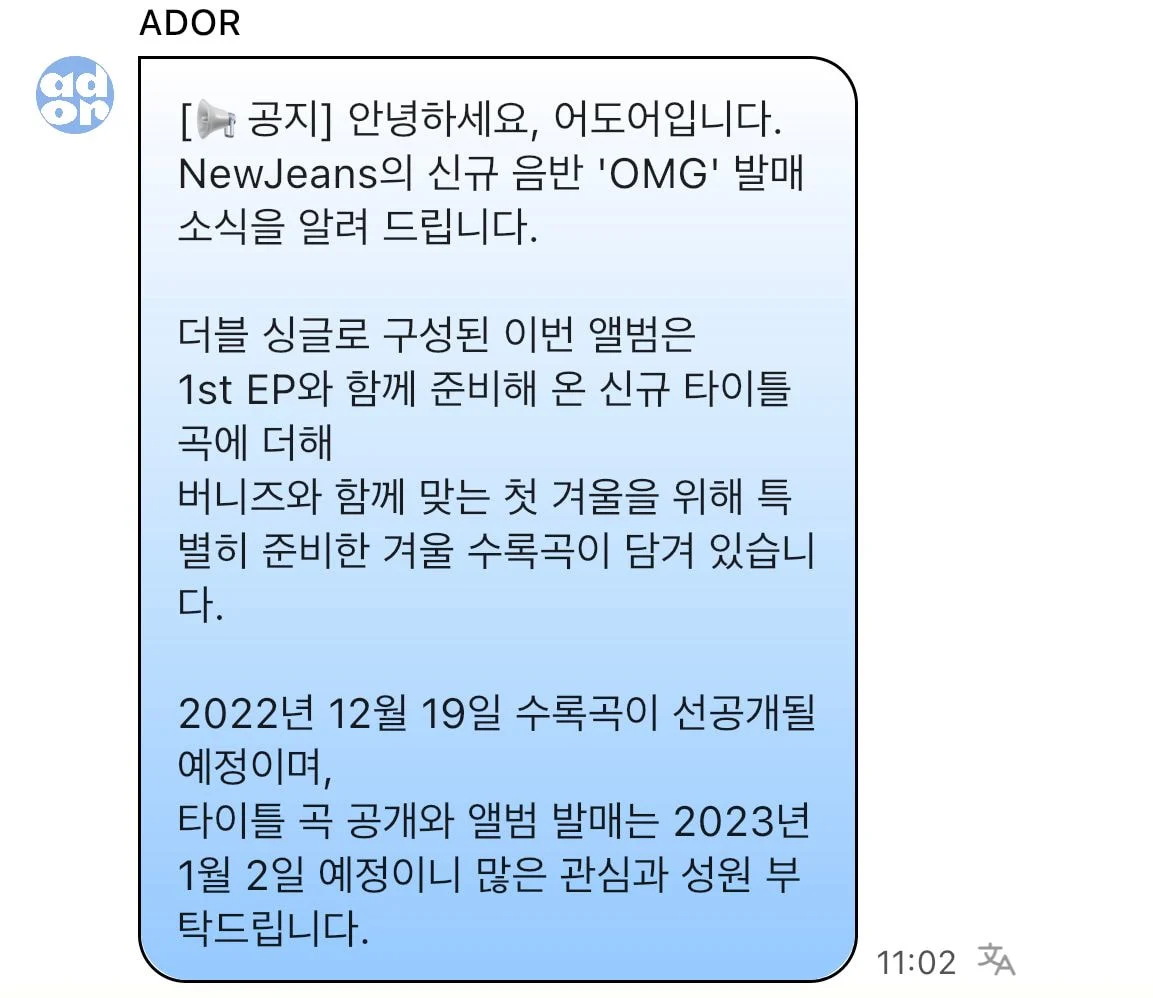 On November 10, NewJeans’ agency ADOR announced that NewJeans will be releasing their new single album “OMG” on January 2, 2023. The single album “OMG” will consist of the title track that was planned at the time of production for the group’s debut album “New Jeans” as well as a winter track that NewJeans prepared for their first winter together with their fan club Bunnies. The pre-release single will be unveiled ahead of “OMG” on December 19.

ADOR CEO Min Hee Jin shared, “If the debut album showcased NewJeans’ summer, this single album will be one that showcases NewJeans’ winter.”

4. Their previous album was so good. I’m so looking forward to this

7. I like how they are testing the waters like this instead of abruptly releasing teasers. It’s pretty unique. Looking forward to NewJeans

8. I think that it will be goodㅋㅋ I’m so looking forward to the MV

9. If they are coming back on January, it’s worth anticipating the yearly rankingㅋㅋㅋㅋ fighting

[theqoo] HYBE’S PLANS FOR NEXT YEAR IN THEIR BRIEFING SESSION

Plans for their new rookie

Next Pledis group, I-Land2 (broadcast in first half of the year), Zico’s first boy group (they are preparing a song that will please both the fandom and the general public)

1. Is HYBE not planning to give Bangtan or the members solo activities? Or did OP just leave that out?

2. What about NewJeans and Bangtan?

3. Hwang Minhyun, TXT and Zico’s male idol group will be ear candies for me

5. I was looking forward for Le Sserafim and NewJeans ㅠㅠ If you’re curious, don’t ask about who and who in the comments and just go watch the Briefing Session directly. They said the NewJeans will come back in January and they even relayed the news right away. Do you guys even care?..

6. I’ve seriously been waiting for TXT for too long ㅠㅠ Looking forward to this album too❤️

7. Bangtan have already talked about their solo plans in an interview before this so there’s no way fans wouldn’t know. People who are asking why they aren’t talking about Bangtan here are not Bangtan fans

8. I knew that Seventeen comes back often so I was expecting them to make a comeback in the first half of the year. Seeing it becoming true makes me even happier