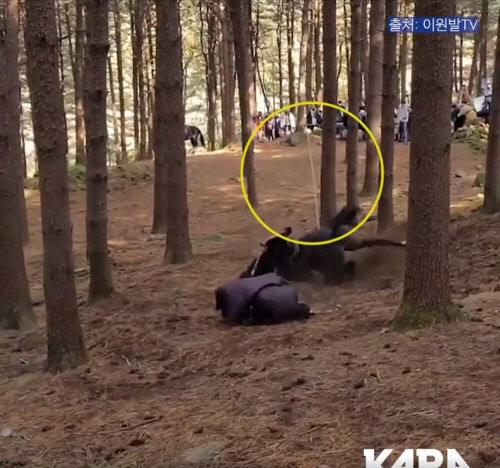 “As the horse ran, the grown men pulled the string from behind.”
Animal rights activist ‘KARA’ announced on the 20th that it had secured on-site video and staff testimony regarding the animal abuse controversy in the KBS historical drama ‘Taejong  of Joseon’.
KARA said through their Facebook on the same day, “We were trying grasp the situation at the time through various channels.”
According to KARA, a staff member who was at the scene at the time of filming said, “Adult men pulled the rope from behind and knocked over a running horse. Although the actor was a stuntman, he was given only general protective equipment without safety devices. In the end, the actor also fell and lost consciousness for a while, and filming was stopped due to injuries.”
Regarding the scene that caused controversy over horse abuse, KARA said,”“It was filmed only once. The reason they were unable to reshoot was because the actor was injured.” “The filming site should be safe for both humans and animals, but the scene of Taejong Lee Bang-won seems to be a dangerous situation for everyone. A filming site that is violent to animals can never be safe for humans.”
They continued, “As shared in yesterday’s post, we sent an official letter to KBS and the production company, requesting an official response to the scene of Taejong of Joseon’s falling from horse scene in the 7th episode.[..]”
KARA said, “Taejong of Joseon’s filming method is considered animal abuse in violation of the Animal Protection Act, which intentionally endangers and injures animals for filming, so we plan to file a complaint with the Mapo Police Station today.”
Earlier, the Animal Freedom Solidarity raised allegations of animal cruelty over a scene in the 7th episode of Taejong Joseon’s broadcast.
It is a scene in which the main character is riding a horse and falls off his horse, and his horse’s neck was broken and his body turned over. A rope was tied to his horse’s ankle. The horse, which had been forcibly flipped upside down, struggled, and then did not even show movement.
In response, the regiment said that it had officially requested to KBS to confirm whether the horse was alive or not.
As this fact became known, complaints were pouring out on the bulletin board of the KBS website, the Viewers’ Rights and Interest Center.
The petition titled “Is the horse scene in Lee Seong-gye’s horse alive in Episode 7 of Taejong of Joseon?” posted on the 17th had 7314 consent as of 4:50 pm that day, and “Is the horse scene in Taejong of Joseon okay? What kind of Joseon era is this now?” The petition got the consent of 2594 people.
If more than 1000 people agree within 30 days, the person in charge of the relevant department must respond directly.
The KBS side said, “We are confirming it,” saying that the related contents were passed on to the production team.

They could’ve used CG or just edited in a way that looked like a fall. Did they have to break the horse’s neck just to film a drama? I can’t understand. On a public broadcast station on top of it
2. [+1,356, -9]
If the horse stiffens right away isn’t he dead? I heard that the horses that are usually used for broadcast filming are racehorses that have retired due to the end of their lifespan, but just because they were born as horses, when they were young, they had to run the track with shouts that they didn’t know, and even when they were old, they couldn’t rest comfortably and were abused like that. This is clearly animal abuse
3. [+648, -7]
They could’ve done everything just fine with CG. Or they could’ve just acted with their upper bodies, why did they have to go this far? I’ve been enjoying this drama since it’s been a long time since I’ve watched an epic, but they had to sh*t all over it. We need to know whether the stunt man and the horse are doing fine
4. [+355, -5]
They’re devils in human flesh… And they’re earning money on top of it
5. [+232, -4]
Crazy
[theqoo] TAEJONG OF JOSEON ‘ABUSING HORSE ONSITE OF SHOOTING”…”EVEN THE ACTOR LOST CONSCIOUSNESS”
original post: here
1. Scrap this f*ckers
2. Let’s sign the petition https://www1.president.go.kr/petitions/603905
“Due to the way the K** Drama **** is treating animals like props, we are asking for the cancellation of the drama and punishment:
3. Does it make sense in this day and age that you tied a wire to your foot and knocked someone over?
4. Are they crazy? Not only the horse, they could’ve killed the stuntman too
5. No but the stuntman fell and it looks like he hurt his hand too. It already hurt so much when you’re going home and not paying attention and end up hitting a wall, imagine how much worse was it for the horseㅡㅡ… Seriously what crimes did the stuntman and the horse commit
6. I thought it was CG, but it was real? I have no words. Just why? Are they crazy? Are they really humans..
7. ????? Are they crazy???
8. Are we living in 2022????? This would’ve been considered barbaric even in the past, but we’re doing this in 2022???
9. Scrap the drama, this isn’t the way you should shoot a broadcast. Do they realize what generation we live in?
10. Are they joking?????? The human and the horse are living beings, they’re not even giving them the basic safety, why shoot a drama?
[theqoo] KBS OFFICIAL STATEMENT REGARDING <TAEJONG OF JOSEON> 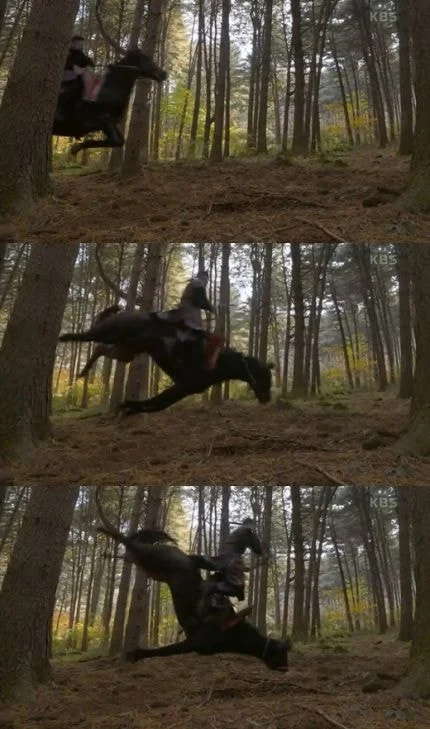 We apologize.
We deeply feel responsible and apologize for the accident that occurred during the filming of <Taejong of Joseon>
The accident occurred on November 2, while filming the scene of Lee Seong-gye’s horse fall that was aired in episode 7 of <Taejong of Joseon>.
Shooting a horse fall scene is a very difficult thing to do. This is because the safety of the horse is fundamental, and the safety of the actors riding the horse and the safety of the staff who shoot it must also be considered. For this reason, the production team went through the process of preparing and checking for any possible accidents a few days ago.
However, despite these efforts, an accident occurred during the actual filming where the actor fell far from the horse and the horse’s upper body hit the ground. Immediately after the accident, it was confirmed the horse had risen on its own and there were no apparent injuries. However, recently, the concern of viewers about the condition of the horse has grown, so we checked the health of the horse again. Unfortunately, it was confirmed that the horse died about a week after filming.
We cannot help but feel a deep sense of responsibility for such an unfortunate incident. We apologize again to the viewers for not being able to prevent the accident and for an unfortunate incident that occurred.
Through this accident, KBS has confirmed that there is a problem with the method of filming the horse, so we will find another way of filming and expressing it so that an accident like this does not happen again. In addition, we will find ways to ensure the safety of animals at various filming sites through the advice and cooperation of related organizations and experts.
Once again, we sincerely apologize to the viewers and to those who love animals.
petition https://www1.president.go.kr/petitions/Temp/e0LZ2w
original post: here
1. What kind of horse could get up on its own after this? What bullsh*t
2. They planned themselves how the horse fell, what accident? They didn’t even check the horse’s condition after it fell because they thought it died right away
3. Ha.. They’re seriously crazy
4. The cost of a living being paid for your public broadcast’ license fee
5. This is seriously cruel
6. They couldn’t have just pretended to make the horse fall? If they can’t then just don’t shoot the scene at all. Imagine dying in pain without knowing what’s happening aruond you
7. Psychopaths
8. The horse is too pitifulㅠㅠㅠ The f*cker who got this idea needs to die the exact same way
9. Where’s the proof that the horse got up by itself? Sounds like an excuse
10. Crazy f*ckers I won’t be able to watch this channel againㅠㅠㅠㅠㅠ People were blowing this up trying to inquire the state of the horse. They killed it, but they said it was fine onsite… Avoiding responsibility. If the people didn’t raise an issue over it, I bet you would’ve just pretended nothing happened right? I enjoyed this drama..