TWICE made a revelation about an upcoming Japanese single set for release in early July.

TWICE made a surprise announcement on May 5 at 8PM KST through their Japanese SNS channel. They revealed a sixth Japanese single is in the works and will be arriving to fans on July 8. 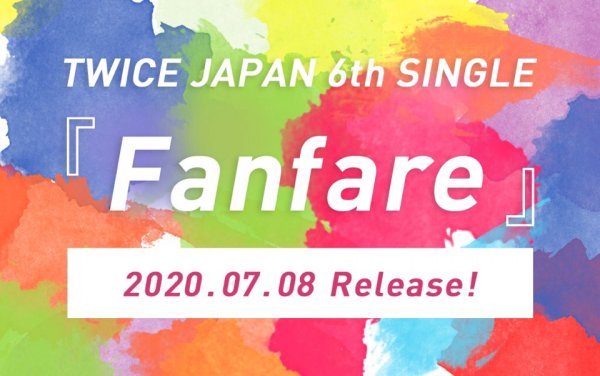 In the video the members said. “We will be releasing our sixth Japanese single “Fanfare” on July 8th. We can’t wait to meet you all.”

The girls also expressed their wishes for everyone to keep their health in mind, just like they are doing themselves.

“Fanfare” is a song which expresses TWICE’s desire to bring some joy and positivity to the world. It will feature a performance filled with powerful energy.

The girls has had a big success in Japan so far. The group has been certified for platinum albums, which are awarded for over 250,000 sold copies for each album released in Japan. This brings high attention to whether the new single would continue the history of their impressive feats.

The group set nine consecutive milestones in Japan so far. Starting with their best debut album #TWICE, which consisted of both Korean and Japanese-versions of their previously released singles.

TWICE continued with their first single “One More Time” in October, a second single in February 2018 titled “Candy Pop”, a third single “Wake Me Up” and their first full album BDZ. The success continued in 2019 with a second best album #TWICE2 and a fourth and fifth singles later in July named “HAPPY HAPPY” and “Breakthrough”, followed by a regular second album &TWICE in late 2019.

Among them, “Wake Me Up” is the first foreign female artist’s single album released in Japan. It has earned a double platinum with cumulative sales of more than 500,000 copies.

&TWICE topped Oricon’s weekly album chart on the first week of its release. That was the fifth time in their career on the number one spot in this chart. This allowed TWICE to achieve a tie with world-renowned pop star Mariah Carey in being one of the top foreign female acts in Japan with so many wins.

Recently, TWICE unveiled four Japanese videos under the name With TWICE which fans can enjoy while staying at home.

On their official YouTube channel, the girls unveiled materials from their first showcase tour, arena tour and dome tours. Those are accompanied by members’ commentary.

The special videos are attracting the attention of local fans which ranked them on the TOP10 most popular videos in Japan.