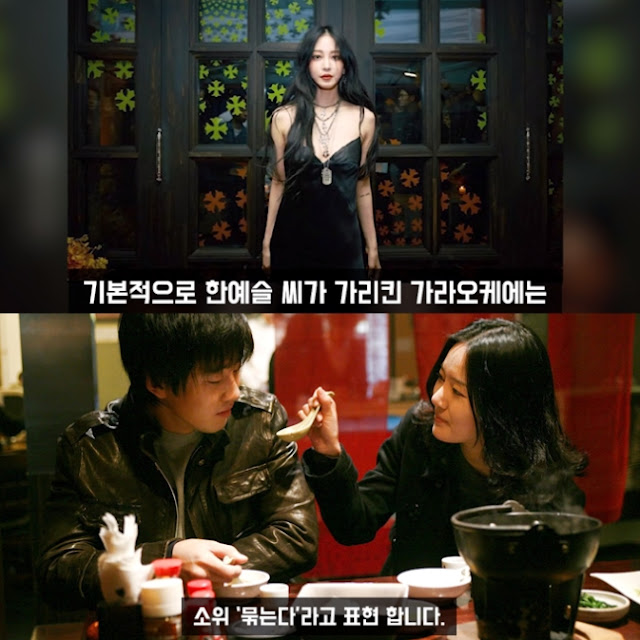 Article: What kind of ‘karaoke’ did Han Ye Seul meet her boyfriend in? “A place you lose your soul in”

A YouTuber explained, “Han Ye Seul claimed that a host bar and karaoke are two different things, and that karaokes are more open about their operations. That has caused a big misunderstanding. I’ve received a lot of calls from people who actually work in the industry and there are some things that I’m going to make clear. A karaoke is not a normal karaoke. It’s actually become one of the hottest businesses lately. They normally serve female clients but they also take male and co-ed clients as well. Karaokes are allowed to operate from 2pm to 10 pm so a lot of the higher ranking hosts and aces have moved to working in karaokes.

The karaokes that Han Ye Seul mentioned have a secret signal for ‘second rounds’. Hosts are forced to move to different rooms after a certain amount of time so clients are obligated to ‘tie down’ their favorite hosts with extra money, usually to the tune of 1-2 million won.

I think it’s important to note that you shouldn’t ever step into these places. Women who make good money are such easy targets for these hosts, and so many have basically gotten their souls ripped out in these places. Just don’t ever step foot in one and believe Han Ye Seul when she says this is just some normal karaoke bar.”

1. [+4,579, -988] Whether she’s dating a host or a chaebol, who cares? She’s the one satisfied with the relationship, what’s it to anyone else? Even if she’s getting ripped off by a gold digger, it’s her money that she’s giving away, not yours.

3. [+1,941, -38] I don’t care that she’s dating him but I think it’s ridiculous that she said “I’ve dated a lot so I know that this guy is the real deal” tsk tsk. Even people who’ve gone through all sorts of relationship experiences still fall prey to bad relationships, how can you be so sure?

5. [+439, -2] Whatever this karaoke stuff is, it’s never normal for anyone to step foot in red light activities like this. Do you think someone who’s looking to make money the easy way out has a normal head on their shoulders? She’s free to date him but don’t shield him and make him out to be something that he’s not ㅋㅋ

6. [+405, -25] Han Ye Seul has always been rumored to be an escort from the Orange County area so it’s not weird at all that she’s dating someone from the same industry. Such cheap roots…

7. [+362, -7] Didn’t Han Ye Seul used to be an escort too? Seems like she’s met her perfect match ㅋㅋ I’m sure she knows more about the people of that industry than the rest of us. She doesn’t seem like the type to get her soul dusted out by some conman like this.

8. [+290, -1] So it sounds like the hosts moved to karaoke bars because of the pandemic and Han Ye Seul ‘tied’ one down with money after falling for one

10. [+198, -1] Hey, she’s the one calling a karaoke host ‘the real deal’ ㅋㅋㅋㅋㅋ just let her be. She’s the Nancy Lang type, won’t ever listen to anyone who tries to tell her otherwise. People like her won’t listen no matter what anyone says until she realizes it for herself. Just let her get played.